As a prisoner for the Lord, then, I urge you to live a life worthy of the calling you have received. EPHESIANS 4:1
Asia Books Reading

The Bookseller of Kabul and My Other Favorite Books on Afghanistan 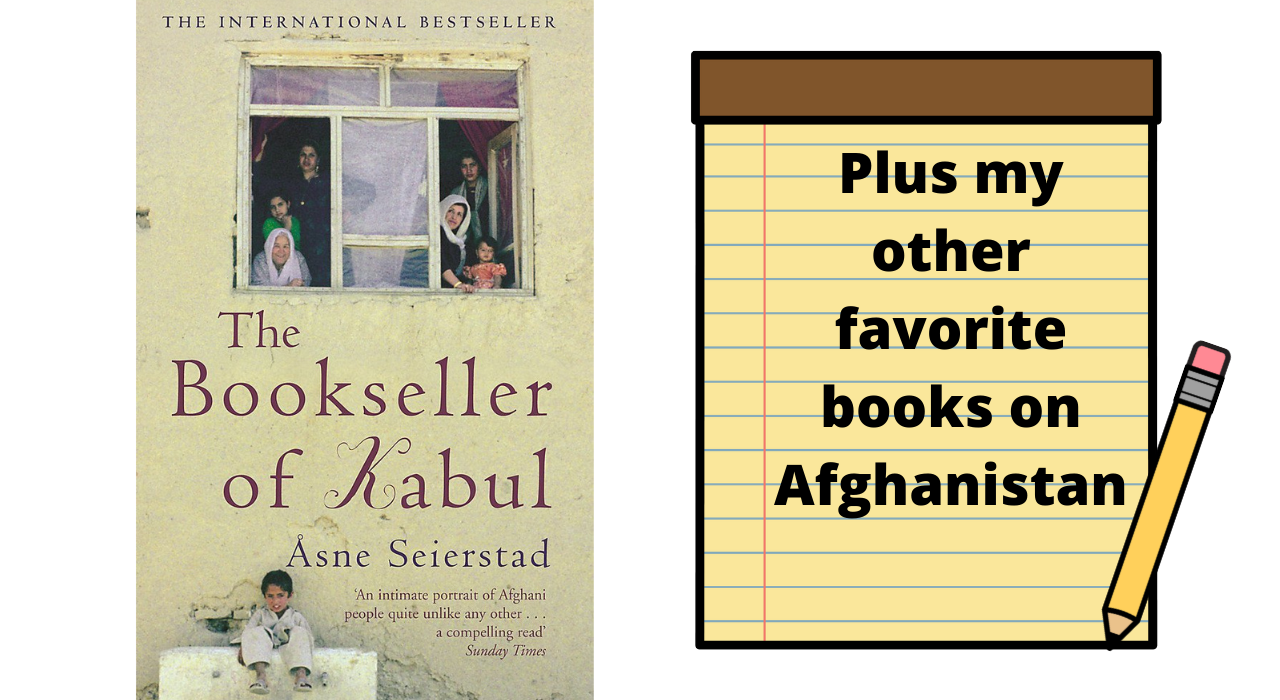 The recent US withdrawal from Afghanistan has left many people, Afghan citizens included, concerned about the Taliban retaking the country. Here are a few of the 16 decrees the Taliban broadcast on Radio Sharia when they entered Kabul in September 1996.

Extremists and oppressive regimes exist throughout the world, so how did I come to care especially about Afghanistan? I don’t know any Afghanis and I have never been to Afghanistan, so the answer can only be: books. It’s through books, through stories both real and imagined, that we visit other places, that we glimpse the lives of others and that we learn how to care about people we have never met.

Afghanistan became somewhere to me through books and I hope this post inspires you to read the stories of this troubled, but compelling, country. I want to share with you what I learned from The Bookseller of Kabul as well as a few other books on Afghanistan I recommend.

Åsne Seierstad, a Norwegian journalist who spent six weeks with the commandos of the Northern Alliance (a group of militias who fought against the Taliban), met a bookseller in Kabul in November 2001 after the Taliban fell. The bookseller, “an elegant, gray-haired man,” intrigued Seierstad and she spent hours talking with him about his life and about the history of Afghanistan. After having dinner with the bookseller’s family at his house, Seierstad told him she wanted to write a book about his family and that she would have to live with them to do this. “You are welcome,” he responded, and she spent four months during the spring of 2002 with his family.

The book’s theme is evident on page 5:

I was a guest, but soon felt at home. I was incredibly well treated; the family was generous and open. We shared many good times, but I have rarely been as angry as I was with the Khan family, and I have rarely quarreled so much as I did there. Nor have I had the urge to hit anyone as much as I did there. The same thing was continually provoking me: the manner in which men treated women. The belief in man’s superiority was so ingrained that it was seldom questioned. (emphasis mine)

The pervasive mistreatment of women makes much of this book difficult to read. Here are some examples.

My only criticism of the book concerns the quality of the writing — while it’s not bad, it’s not great either, though I think this is because the book was written in Norwegian and translated into English. The Bookseller of Kabul is a fascinating, personal look at a family dominated by a tyrant.

After reading the book, I learned that it infuriated the bookseller. Seierstad was even accused of invading the family’s privacy before she was cleared.

My Other Favorite Books on Afghanistan

Khaled Hosseini’s debut novel, The Kite Runner, was hugely popular and together with A Thousand Splendid Suns, has sold over 38 million copies worldwide. Hosseini was born in Kabul in 1965. When he was 11, his dad’s job took the family to Paris; they were later unable to return to Afghanistan because of the Soviet invasion and sought political asylum in the US. A Thousand Splendid Suns tells the story of two women who become teenage wives, at different times, to the same man, amidst a background of jihad, civil war and Taliban control. This is one of the few books I’ve read twice.

The Underground Girls of Kabul by Jenny Nordberg

Jenny Nordberg is a Swedish journalist who first wrote about girls in Afghanistan who live like boys in the New York Times in 2010. The author notes that The Underground Girls of Kabul was reported from Afghanistan, Sweden and the US from 2009-2014, while the book’s events take place in 2010 and 2011. Divided into 4 parts, this book tells 4 stories of girls and women who have or who are living as males because of the freedom and privilege only males are given in Afghanistan.

Here’s a quote about what life is like for women in Afghanistan:

On the topic of progress for women since 2011, Azizta [Nordberg’s interview subject] expresses little satisfaction to visiting foreigners, of which I am just the latest: Yes, more women are seen on the streets of Kabul and a few other larger cities than when the Taliban was in power, and more girls are enrolled in school, but just as in earlier eras when reforms were attempted, most progress for women is limited to the capital and a handful of other urban areas. Much of what the Taliban had banned and decreed regarding women is still effectively law in large parts of this mostly illiterate country, enforced by conservative tradition. In many provinces, burkas are still commonplace, and women rarely work or leave the house without their husbands. The majority of marriages are still forced, honor killings are not unusual, and any involvement of the justice system in a rape case usually means that only the victim goes to jail, charged with adultery or with having had premarital sex–unless she, as a commonly imposed solution, is forced to marry her rapist. Women burn themselves to death using cooking fuel to escape domestic abuse here, and daughters are still a viable, informal currency used by fathers to pay off debts and settle disputes.

Kargar was born in Kabul in 1982. Her family fled Afghanistan during the civil war, first going to Pakistan in 1994 and then to England in 2001. In London, Kargar worked as a presenter and a producer of the BBC’s Afghan Woman’s Hour, a radio show that ran from 2005-2010 and was broadcast throughout Afghanistan. The 12 stories Kargar tells in Dear Zari are from her work on the show.

Have you become interested in a particular country through book? Or have you read other good books on Afghanistan? Let me know in the comments.

NOTE: Yellow legal pad and pencil clip art are from Bunny on a Cloud.