As a prisoner for the Lord, then, I urge you to live a life worthy of the calling you have received. EPHESIANS 4:1
Books Reading Teaching 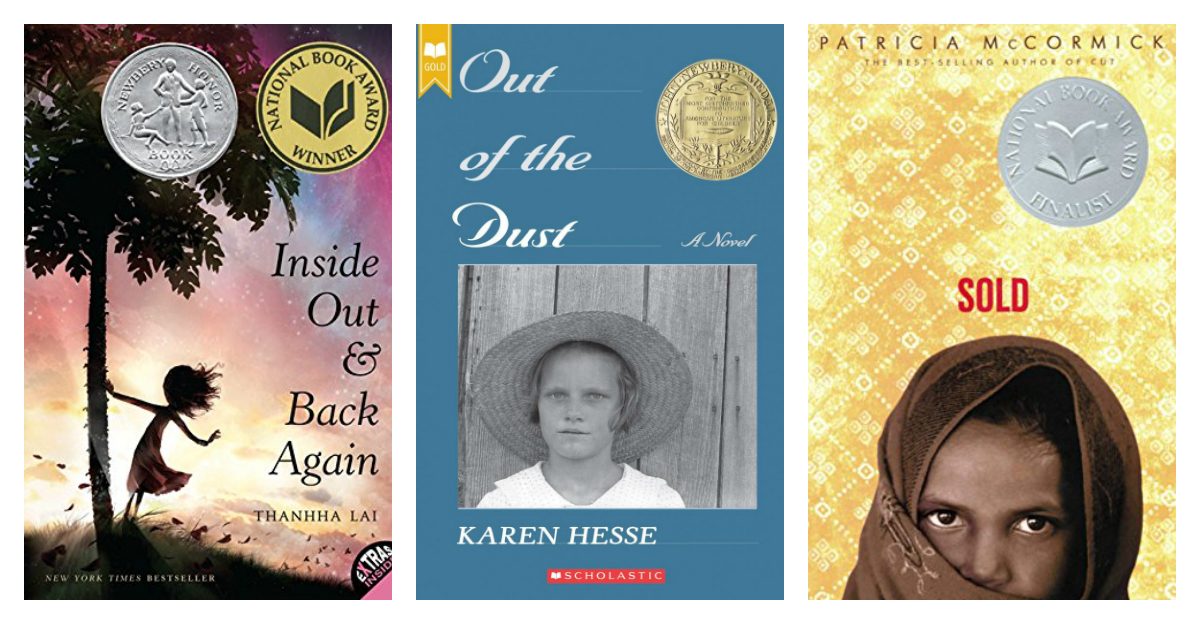 Even though I studied Secondary English in college (this is what people who want to teach middle and high school English study), I am not a huge poetry fan. Maybe I should be, but I don’t enjoy reading what I don’t understand. There IS a lot of accessible poetry out there though — accessible enough even for children — so really everyone can enjoy poetry if they’re exposed to the right stuff. And why not expose children and young adults (aka teenagers) to poetry so that they have more time to enjoy it?

Each of these novels could be a good introduction to poetry for kids and teenagers who haven’t yet been introduced because these books are the best of the best; all are highly acclaimed. They’re also great resources for teaching poetry in the classroom (or the kitchen).

Without further ado, here are my go-to free verse novels, in recommended-age order.

1 Inside Out and Back Again by Thanhha Lai

This story, officially categorized as historical fiction, is based on the author’s own experience. The 10-year-old narrator and her family flee Vietnam as refugees after the Communists take control of Saigon in 1975 and end up in Alabama. There isn’t a lot of poetic language in this book, but the story is still powerful. What stands out are the last lines of many of the poems; ending the poems with force and an absolute sense of closure is the author’s greatest strength.

Here are three of my favorite poems (the first is right before the fall of Saigon; the second and third are in Alabama and reflect my feelings about English):

I start to chop off
a potato’s end
as wide as
a thumbnail,
then decide
to slice off
only a sliver.

I am proud
of my ability
to save
until I see
tears
in Mother’s
deep eyes.

You deserve to grow up
where you don’t worry about
saving half a bite
of sweet potato.

Brother Quang says
add an s to nouns
to mean more than one
even if there’s already an s
sitting there.

All day
I practice
squeezing hisses
through my teeth.

Whoever invented
English
must have loved
snakes.

Do not add an s
to certain nouns.

Brother Quang says
no one knows.

So much for rules!

Whoever invented English
should be bitten
by a snake.

This book won the National Book Award in 2011 for young people’s literature and was a 2012 Newberry Honor Book. It received a starred review from Booklist, Publishers Weekly and School Library Journal.
Publishers Weekly recommends Out of the Dust for ages 8-12.

2 Out of the Dust by Karen Hesse

What do you know about the Dust Bowl? Pretty much nothing? Yep, me too, until I read this book. And what better way to learn about this cataclysmic event in our rather short US history than to enter a story narrated by a 14-year-old girl in simple, imagery-filled language? I especially love the author’s frequent use of alliteration (the use of the same consonant sound at the beginnings of multiple words in a phrase) and personification (the giving of human qualities to inanimate objects).

Here are a few of my favorite lines (italics are mine):

Now Livie’s gone west,
out of the dust,
on her way to California,
where the wind takes a rest sometimes.
And I’m wondering what kind of friend I am,
wanting my feet on that road to another place,
instead of Livie’s.
(from “Losing Livie”)

While Ma and Daddy slept,
the dust came,
tearing up fields where the winter wheat,
set for harvest in June,
stood helpless.
I watched the plants,
surviving after so much drought and so much wind,
I watched them fry,
or
flatten,
or blow away,
like bits of cast-off rags.
(from “Fields of Flashing Light”)

But now,
sorrow climbs up our front steps,
big as Texas, and we didn’t even see it coming,
even though it’d been making its way straight for us
all along.
(from “The Path of Our Sorrow”)

Snow covered the dust
softened the
fences,
soothed the parched lips
of the land.
(from “Hope”)

This book was awarded the 1998 Newberry Medal, the most prestigious American children’s literature award. It received a starred review from Booklist, Publishers Weekly and School Library Journal. Publishers Weekly recommends Out of the Dust for ages 11-13.

This book was actually too much for me. I read this book in 2013 and still can’t get it out of my mind. Why? Because she needs to help support her family, a thirteen-year-old Nepali girl is sold into prostitution. What I like most about the writing is the word choice and, like Inside Out and Back Again, the last lines.

Here is my favorite vignette:

Inside the bundle Ama packed for me are:
my bowl,
my hairbrush,
the notebook my teacher gave me for being the number one girl in school,
and my bedroll.

Inside my head I carry:
my baby goat,
my baby brother,
my ama’s face,
our family’s future.

My bundle is light.
My burden is heavy.

This book is a National Book Award finalist. It received a starred review from Booklist and Publishers Weekly. Publishers Weekly recommends Sold for ages 12 and up. Read an interview with the author at https://www.patriciamccormick.com/sold.

Have you read any of these books? Or do you have any favorite novels in verse for children or teenagers? Let me know in the comments.

My Favorite Classroom Decor and What I’m Looking at Buying